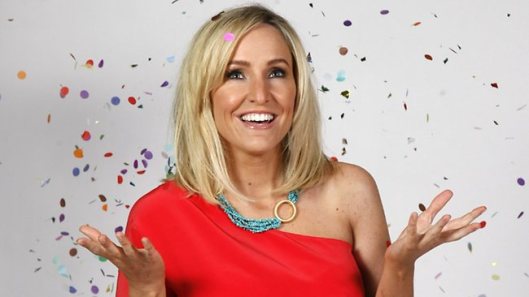 Radio and TV presenter Fifi Box, and her estranged lover Grant Kenny, welcomed a daughter on April 5 who has been named Beatrix Belle, nicknamed “Trixie“. Trixie Box was born at 2.30 pm, and her birth was announced live on Hamish and Andy’s annual Logie show. Grant has three children with his former wife, retired swimmer Lisa Curry, and their names are Jaimi, Morgan and Jett.

Fiona or “Fifi”is co-host of Fifi and Jules on the Today radio network, and is also entertainment editor on Channel Seven’s Sunrise. You may recall that Fifi’s radio partner, Jules Lund, also welcomed a baby girl not long ago. Fifi is the sister of Kiernan Box, who is the keyboardist for indie band Augie March.

Grant is a former Ironman champion who was a household name in the 1980s, and won bronze at the 1984 Summer Olympics. He has been awarded the Order of Australia, the Australian Sports Medal, and the Centenary Medal. Grant and his ex-wife co-own the Curry Kenny Aviation group.

Fifi did not choose her daughter’s name until after she was born, and also considered the names (or nicknames?) Coco, Lulu, Gigi, and even Fifi. The name Beatrix, with its nickname Trixie, was covered on the blog only recently under names which don’t chart in Victoria (Fifi’s home state).