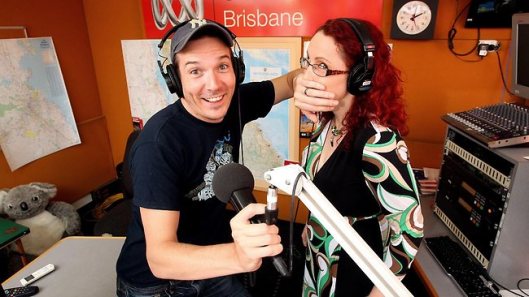 Comedy couple Stav and Kat Davidson welcomed their first child on November 16, and have named their daughter Lorelei, nicknamed Rori. Lorelei Davidson was born at 10.40 am, weighing 4.69 kg (10lb 5oz) and 58 cm long.

Stewart or “Stav” is originally from Scotland, moving here as a child, and taking out Australian citizenship last year. He started his comic career by entering the Raw Comedy Competition in 2000, and then becoming a stand-up regular, especially in Brisbane. He has appeared on The Comedy Channel’s Hahn Ice Headliners, and is heard nationally on Austereo as a member of the B105 Breakfast Crew.

Katrina or “Kat” (nee Shiels) started out in Theatresports in 1993, and has been doing stand-up since 1997. She is a regular on ABC radio, tours internationally, and is also in demand as an MC. Kat also writes her own blog on her website, where she has shared some of her thoughts on pregnancy. The Davidsons have been married for seven years.