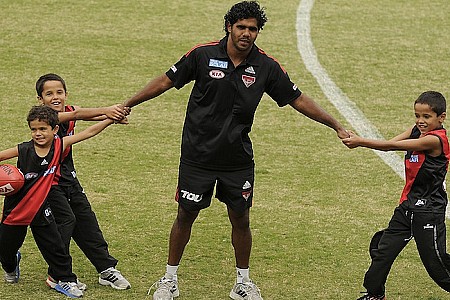 Alwyn Davey from the Essendon Bombers, and his wife Janelle, welcomed their son Cruz on September 12. Cruz Davey was born at 11.17 am, weighing 3.23 kg (7 lb 1 oz). Cruz is the fourth boy in the family, and joins big brothers Alwyn, Jayden and Alijah. Cruz continues to be a baby name favoured by male sports stars.

Michael Walters from the Fremantle Dockers, and his partner Marnie, welcomed their daughter Layla in February. Layla is their first child.

David Wojcinski from the Geelong Cats, and his wife Casey, welcomed their daughter Olive earlier this year. (I’m not exactly sure when, but a newspaper article from June says she is five months old). Olive joins big brothers Alfie, aged 6, and Monty, aged 3. David and Casey were married in 2008. Anyone else loving the super-cute sibset Alfie, Monty, and Olive?