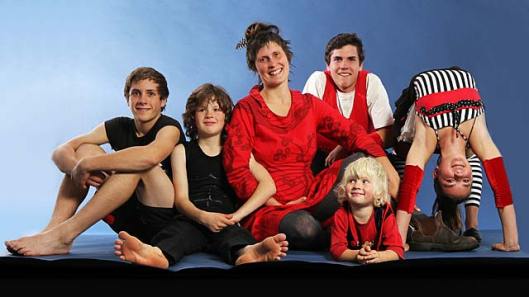 Kristy and Mark Sands run the Sands Family Circus. They began performing together in the mid-1990s, and initially planned on having two children, but ended up with a few more than that. All the children naturally learned circus skills, and became part of the act.

Tohua (13) BOY – in Maori means “egg”; in Polynesia, a Tohua is a ceremonial meeting place

Next child (due in July)

Anita Lincolne-Lomax turned her passion for attachment parenting into a business when she founded Babes in Arms several years ago. Babes in Arms sells baby carriers and baby slings throughout Australia and New Zealand, and last year Anita was named 2011 Mumpreneur of the Year by parenting website connect2mums.com.au, and Babes in Arms is a finalist in two categories of this year’s Australian Small Business Champion Awards. Her husband Ralph now works full-time in the company.

Jontae (5) – a variant of Jonte, a pet form of Jonathan

THE COOKS WHO COOK

Jo Cook is a chef and market curator, and food is her passion. A member of Slow Food Hobart, she runs Flavour Workshops for children, and volunteers at a primary school to work in their kitchen garden. Next she hopes to link up with the university to inspire a new generation to eat more mindfully and healthily. Of course, at home, the family connects around growing food, cooking meals and enjoying them together around the table.

Sarra Elradi came to Tasmania from Sudan with her four children to give them a better start in life. She had separated from her husband, and the family spent two years in Egypt, which they describe as “very tough”, because there was no one to help them. When they arrived in Australia, only Sarra’s eldest son could speak English, so they were on a steep learning curve; however they appreciate the education they are receiving and the opportunities that are available to them. Sarra’s daughters are both members of the Glenorchy Young Women’s Multicultural Group.