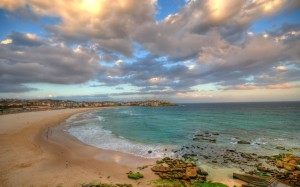 I recently received an e-mail from a father-to-be and blog-reader named Gabriel; technically I’m still on holiday, but this was urgent enough to bring me back early!

Gabriel and his wife Theresa are expecting a baby boy in only two weeks; unfortunately, the name they have picked out has met with a cool reception from family and friends.

The couple first met on Bondi Beach, and, like many Australians living near the coast, are strongly drawn to the ocean, which is cleansing and refreshing, and for a city-dweller especially, washes away the fatigue that comes from modern life. They want a name with a meaning connected to the beach and the sea. They are also very keen to use an Aboriginal Australian word for a name, feeling that this is a perfect way to honour their homeland.

They immediately fell in love with the idea of using Daku as a name. This is a name given to boys meaning “sand”, and apparently it is from one of the languages of north-west Western Australia. Not only did they love the sound of it, but the meaning seemed ideal. Not only did they meet and fall in love at the beach, but sand itself conveys the power of water, which gradually over millions of years wears down great rocks and boulders into fine grains. It therefore holds connotations of patience and persistence – qualities which they hope their son will learn to possess.

When they shared their choice with family and friends, others saw the name quite differently, and thought it was a choice which would lead to teasing. Basically their objections amounted to this:

Their families would much prefer a name which is clearly European and Christian – something along the lines of John, Paul, Daniel, or Xavier.

Gabriel and Theresa now have a dilemma on their hands: do they ignore everything their families and friends say and follow their hearts, or do they choose another name which will cause less controversy? With only a couple of weeks to go, they are starting to get a little stressed over it.

Everyone has a particular bias in a debate, and I should declare mine straight away. I believe that it is the parents who get to choose their child’s name, not extended family, relatives, friends, or well-wishers.

Now you could take your story onto any name forum, and you will be able to find at least a dozen people who will advise you to just tell your family to butt out, shut up, and mind their own business in no uncertain terms, then move interstate so you don’t have to deal with them ever again. It’s easy advice to give, but I’m not sure it’s necessarily the best advice to follow.

For a start, obviously you love your family and don’t want to alienate them or cause a big family drama just as a baby is about to born and you need support more than ever. Second, occasionally the objections that family and friends offer have some validity, or make some sense. If you were planning to name your child Freddie Hoff or Penelope Ophelia Overton, a friendly hint might help you realise the mistake you were about to make. At the very least, they give you a taste of how others might see that name, and what response it could get. It’s better to have that information in advance.

As far as I can see, these are the choices the two of you have before you:

1. Go ahead with your original plan, and name your son Daku

Pros: You son will receive a name that you both love, and love hearing – moreover, a name which is a constant reminder of your love for each other. That’s incredibly special. You will have a wonderful story to share with your son when he asks, “Mum and dad, why did you call me Daku?” Maybe one day you can take him to Bondi and show him where his own unique life story and name story began, and when he hits a difficulty in life, perhaps you can show him the sand on the beach that he’s named after, and explain how it could only be made through the sea patiently grinding it down day after day, and never giving up.

Cons: Your family may not be happy with the choice you have made, or feel slighted that their dire warnings were not heeded. However, you have listened to everything they said and taken it on board, and you have also chosen his middle name, Rudolf, after Theresa’s father. You have pretty much already done your family duty. It’s not uncommon for family members to become reconciled or at least used to a “strange” name once they see it on their adorable grandson or nephew, and they may come up with their own pet name for him anyway.

I do feel that your family and friends have gone straight to the “worst case scenario” for the name, and some of their ideas are probably a little silly. I think Sydney is cosmopolitan enough to cope with the name Daku, and the slang issues seem a bit overboard to me.

“Dack you” is pretty dated slang now (although boys do seem to hang onto old slang more than girls), and in any case, most names sound a bit like something else. I find it hard to believe your son will suffer horribly because of his name, although naturally I can’t guarantee he will never be teased because of it. I must say that the name didn’t remind me of the phrase dack you.

The Portuguese slang term isn’t one I was able to find a reference to online, so doesn’t seem to be in general circulation. Unless you are planning to ship him to Portugal at some point, or you associate with many Portuguese people, perhaps this isn’t the big problem you fear.

Although Daku is a girl’s name in India, it’s a word and name used all over the world in many different cultures and in different contexts. In Japan it means “embrace, hug”; in Fiji it can mean “cousin”, and is also a place name; in Malay it means “I, me, myself”; in Hindi it can mean “bandit, pirate”; in Swahili it is related to the word “grasp, seize”; in ancient Sumerian it meant “executed”. It’s also a word in an invented language in the game World of Warcraft (no idea what it means).

When a word has this many meanings, it’s hard to get too worried if one or two are less pleasant than others. As well as a girl’s name, Daku is also a surname used all over the world, by people from a variety of ethnic backgrounds.

Realistically, what you will face with the name Daku is people not being sure how to spell it or stumbling over the pronunciation. When your son is very small, people may be unsure whether he’s a girl or a boy. People will say, “What an unusual name! Where does it come from?”.

I’m pretty sure once you explain it’s an Australian Aboriginal name meaning “sand”, 90% of people will just go, “Oh right then”. 10% will be interested enough to ask for more information (Most likely, “Do you have any Aboriginal heritage?” or “Why did you choose it?”). I do feel once they know the origin and meaning, most criticism they may have offered will be quashed.

I know that parents who have chosen unusual names find that although they do sometimes get some aggressive or rude comments, they also find many people who say, “Oh that’s a fantastic name”, “It’s so different”, “What a great meaning” and so on. It does tend to stick in people’s memories. You don’t usually get this kind of attention and enthusiasm if your child’s name is Daniel or John.

2. Please your family by choosing a standard European-style name

Pros: Your son will have a name that blends right in with everyone else’s. People will know how to say it and spell it. He won’t be questioned about his background or his name. His name will be in a style which fits in with his family and community.

I’d love to be able to say that your family will appreciate your sacrifice forever and shower you with praise and devotion, but they probably won’t. They may secretly despise you for giving in; they may resent you for resisting them until the last minute; they may figure that if you caved in on such a big issue, you will always cave in on smaller ones; some of them may still dislike the name you choose. They may forget all about the disagreements during the pregnancy, and in ten years will assume his name was always going to be Paul. If you try to remind them what a sacrifice you made, they may roll their eyes about the “big fuss” you keep making about it.

Cons: He will miss out on hearing that wonderful name story. When he asks, “Why did you name me Xavier?” you will say, “We did have another name picked out, but ended up going with something your grandma liked. The name we chose was meant to inspire you to always be persistent; ironically, we didn’t persist with the idea”.

3: Pick another name that is similar to Daku, but causes less family friction

You did say that if your son had been a girl, he would have been named Iluka, an Aboriginal word and place name said to mean “by the sea”.

You may not have realised this, but in Australia Iluka is generally accepted as a male name. It’s usually listed as a boy’s name in baby name books (although giving it to a girl would be fine). Because it sounds like the popular boy’s name Luca, it’s often taken as a native elaboration of that name, and is given the nicknames Luke or Lukey.

Iluka has a similar sound, origin and meaning to Daku, but it might be something your family could accept more readily, as it sounds like popular names Luca, Lucas and Luke, and has the same nicknames as them.

If you were worried about using a name you were reserving for a future sister, there are many, many pretty sea-oriented names for girls from Aboriginal languages.

If you were feeling very bold, you could give either a son or a daughter the name Bondi, which means “the sound of water breaking over rocks”. It’s one I saw given to a baby girl in the Bonds Baby Search, but seems unisex to me, and rare enough to be up for grabs by either gender.

The word used in the Sydney area for beach sand was marrang, and I’m afraid that’s all the beach-related Aboriginal words which sound like masculine names I can think of. I suggest that you buy a copy of Macquarie Aboriginal Words, which would make a useful reference tool.

I can’t make the choice for you, that is your privilege. I hope you at least feel a bit less stressed seeing your choices laid out in print with some possible outcomes attached.

Once your little boy arrives and is safely settled in, please please please let us know what you chose, and how it’s gone down with everyone on a real baby!

23 thoughts on “Baby Name Dilemma: They Love a Name That Nobody Else Does”