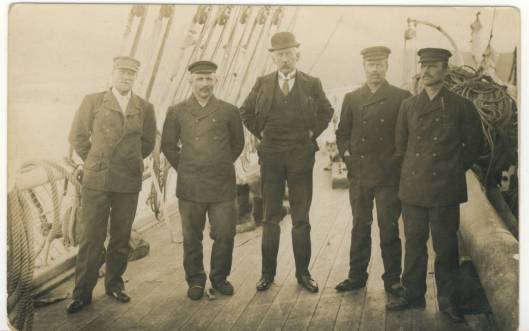 March 7 this year marked the centenary of an important event in history. One hundred years ago on this date, Norwegian explorer Roald Amundsen sailed into Hobart, having led the expedition which first reached the geographic South Pole, on December 14 1911.

You would think that such an achievement would be greeted with parades and brass bands as they disembarked, and the men of the expedition would be celebrating with wine, women and song. However, Amundsen and his crew behaved very mysteriously. The men remained on board their ship, the Fram, while Amundsen posed as an ordinary sailor, and booked himself into Hadley’s Hotel, where they gave him a crummy room and treated him like a tramp.

Roald Amundsen sent coded telegrams of his feat to his brother and the King of Norway, but had to maintain his silence. Under the terms of several media deals he had made, he couldn’t go public until the contracted newspapers in London, Paris, Berlin and Oslo had published their exclusive stories.

On March 10 he broke his silence, and the Hobart media learned to their chagrin that the biggest story in the world had been right under their noses, and they’d been pipped at the post by the European papers. The hotel suddenly couldn’t do enough for their guest.

Tasmania has always had a special relationship with Antarctica, being the last port of call before you reach the frozen wastes, and Hobart was a pivotal part of the great age of Antarctic exploration. Today it is a base for Australian and French supply ships, and the Institute of Marine and Antarctic Research is currently under construction on the city’s waterfront.

To celebrate Amundsen’s centennial, last weekend the city of Hobart re-enacted the historic moment that the Norwegian explorer sent that vital telegram, ending with the unveiling of a commemorative plaque at the General Post Office from whence the telegram was first sent. There was also a Huskies Picnic, with husky displays, and other Amundsen-related fun.

Roald is the modern form of the Old Norse name Hróðvaldr or Hróaldr, meaning “famous ruler”. These Viking names seem to turn up in the historical records fairly frequently, and a nobleman named Hróaldr is said to have been one of the first Norse settlers in Iceland. According to Kay at Nook of Names, it is one of the possible origins for the English surname Rowett, and it is also behind the English surname Rolston. Roald is a place name in Norway.

This name is quite familiar to most people because of the author Roald Dahl, who was born in Wales to Norwegian parents, and named after the polar explorer, Roald Amundsen. Although Roald Dahl wrote adult fiction, he is best known and loved for his children’s books, which have become modern classics.

Titles such as Charlie and the Chocolate Factory, Matilda, The Witches, James and the Giant Peach, and Fantastic Mr Fox have been enjoyed by children as both books and movies. There are very few children who are not delighted by the dark comedy of Mr Dahl’s storytelling; some of them may be heartened to learn that Roald Dahl was only an average student at school, and considered an atrocious writer.

I think this name sounds very strong and even heroic (Roald Dahl himself was a World War II fighter ace). The pronunciation is a slight issue, because the Norwegian way to say it is ROO-all, but the English way is ROE-ald. Either way, there is a danger of it becoming slurred into the word rule or rolled. You get a very Australian nickname, Roo, from the Norwegian pronunciation.

Whether you would like to honour a polar explorer, a popular author, Norwegian heritage, Viking ancestry, or a connection with Antarctic research, Roald seems an excellent and unusual choice.

(The photo is of Amundsen with his crew on board the Fram; he is the one in the middle wearing a bowler hat. The photo is held by the Nasjonalbiblioteket in Oslo).