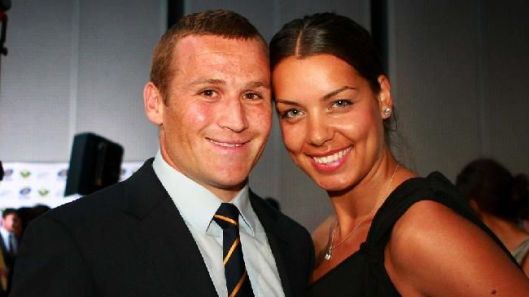 Matt played rugby union for the ACT Brumbies, and the national men’s team, the Wallabies. Last year he signed with French club Toulon, and moved to France. Bianca (nee Franklin) is a netball player from country Western Australia who plays for the Adelaide Thunderbirds. An Indigenous Australian, she received the Aboriginal and Torres Strait Islander Commission Award for West Australian Young Achiever of the Year in 2003.

Bianca and Matt met at the Australian Institute of Sport in Canberra, where Matt was attracted by Bianca’s athleticism and height (she’s slightly taller than him). Matt and Bianca were married on the Gold Coast in December 2010.

Both Matt and Bianca come from sporting families. Matt’s dad Ron Giteau is a former rugby league player who was captain of the Canberra Raiders, and his older sister Kristy plays both rugby codes for Australia. Bianca’s brother is Australian rules star, Lance “Buddy” Franklin. Levi Giteau has some fantastic sporting genes there.

I do apologise for the lateness of this news, as Levi’s birth in France never seems to have filtered down to the mainstream press.