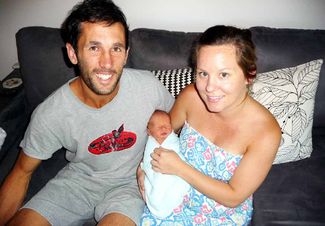 Hockey star Mark Knowles, and his wife Kelly, welcomed their first child on November 26. Their son is named Flynn William, and he weighed 2.86 kg (6 and a half pounds) when he was born. Mark’s sponsor has already sent baby Flynn a tiny hockey stick so he can start practicing.

Mark is a member of the national men’s hockey team, the Kookaburras, and says that the birth of his son ranks right up with winning a gold medal at the 2004 Olympics in Athens.

Flynn Knowles is the second celebrity baby called Flynn this year – the first one was Flynn Bloom.

(Story and photo from The Morning Bulletin, December 1 2011)