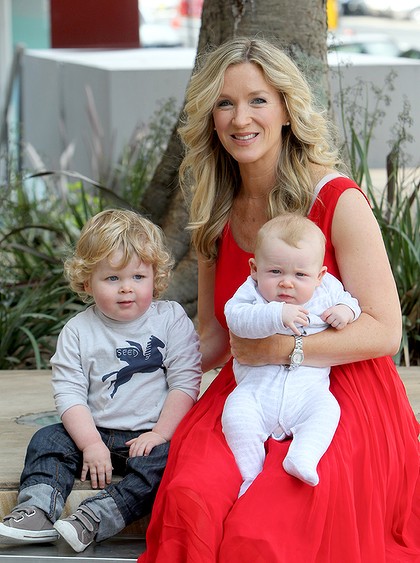 Jacinta Tynan is a journalist and news presenter who works for Sky News Australia. She is the grand-niece of author John O’Grady, who wrote the best-selling comic classic, They’re a Weird Mob, under the name Nino Culotta; he made rather a career of explaining the Australian culture of his time, with satirical books such as Aussie English and Aussie Etiket.

Jacinta has two young sons: Jasper Jerome Pep, aged 2, and Otis Liam Francis, who was born just a few months ago in May.

Jacinta’s partner is property executive Liam Timms, and he has also managed to get himself on television, appearing on ABC’s science show Catalyst, in a special on the science behind fatherhood. Baby stories so often focus on the mother and neglect fathers that I do recommend clicking this link to watch the show, and if you can’t watch the video, you can read the transcript.

At the end of the show, we get to see Liam’s reactions as his son is being born, and nervousness soon turns to fear, because there are complications, and he is told Jacinta needs an emergency caesarean. While the other dads got to be at the birth of their children, poor Liam was left anxiously pacing the corridor.

In fact, Jasper’s entrance to the world was dramatic all round, because what the show doesn’t tell you is that Jacinta went into labour while she was reading the news! She was in labour for 48 hours, and the baby just refused to come out, until the caesarean was performed as a last resort. Jacinta had done a Calmbirth course, and was meditating throughout, so she coped extremely well. Even though Jasper had been through a gruelling ordeal being born, doctors were amazed at what a calm baby he was, which Jacinta attributes to her meditating twice daily during pregnancy.

On Catalyst, you get to see the end of Liam’s story – he is left alone with Jasper for two hours, and quite clearly falls in love with him at first sight. It was a very touching conclusion, because unlike the other dads, Liam was worried that he wouldn’t be able to summon the “right” emotions or bond with his son, and it just wasn’t a problem at all.

Jacinta was one of the mature-aged mothers who dashed off a huffy opinion piece in the wake of Dr Barry Walters telling her that she was “selfish” to have had her first child at 40, and her second at 41. She feels that she is now the best mother it is possible for her to be, having achieved most of her dreams, and is now ready to devote herself fully to her children.

You would think that Jacinta might have had some sympathy for Dr Walters being vilified in the press, as she too was subjected to much vitriol after publishing an article on how flipping easy parenting is. After being a parent for a whole 9 months, she decided she pretty much knew everything about it, and told us all motherhood was an absolute breeze and everyone should stop complaining about it.

I’m not sure why Jasper Jerome was named Jasper Jerome, but the name Pep is after the boat that Liam and Jacinta met on (Liam is a keen boatie, and according to the Catalyst show, seems to have bought a cradle to take the baby on the boat before anything else).

Otis Liam Francis appears to have been born very quietly, and without all the fanfare of his big brother. He is one of two celebrity babies named Otis this year, and has his dad’s name as one of his middles.

Jasper and Otis seem like a very “American-style” sibset to me, with a touch of the West about it, as well as a touch of Hollywood. It’s handsome, hipster, and old money made cool again.

4 thoughts on “Saturday Sibset: Jacinta Tynan and Her Two Boys”