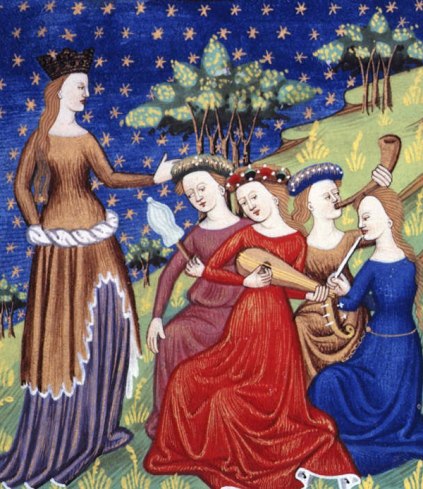 If you were in Sydney in early October, you could have attended the Royal Australian Navy International Fleet Review, celebrating one hundred years of our navy. Or, if you were of a more musical bent, you could have been there for The Renaissance Player’s 35th Runnymede Pop Festival. Held at Sydney University in its Gothic-style Great Hall, this is a unique concert of music, mime and poetry from medieval Europe, performed in brightly-coloured costumes.

The Runnymede Pop Festival has been going since 1973, and from the beginning has featured early music specialist Winsome Evans. Winsome is the director of the Renaissance Players, Australia’s oldest early music ensemble, and she is a professional harpsichordist, composer, and arranger. She conducted the first Renaissance Players concert while still a student.

Winsome is a recipient of the British Empire Medal in the Queen’s Birthday Honours List, The Order of Australia, and a NSW Jaycees Award for services to music.

Winsome is an English word meaning “charming in an innocent manner”. A winsome person is cheerful and open-hearted, engaging, and perhaps slightly naive, in a completely delightful way. The word comes from the Old English for “joy”, and is ultimately from an ancient root meaning “wish, love”.

Winsome is also an English surname, coming from the village of Winchcombe in Gloucester, or from Winscomb in Somerset. In either case, the name is Old English, and means “remote valley”. However, in some cases, the surname may have come directly from the Old English word winsom, meaning “attractive, lovely”, used as a personal name. If so, it means that the first name Winsome could date back to medieval times.

The first name Winsome can be found in records from the middle of the 19th century in North America, and seems to have been especially associated with Ontario, Canada. The reason for this may be Winsome Lake, which is one of the many thousands of smaller lakes in the Great Lakes region of Ontario, but why it inspired baby names is something of a mystery to me. I have been unable to discover how Winsome Lake received its name, because it is relatively obscure.

There are over one hundred women named Winsome in Australian records, most of them born around the turn of the twentieth century. There is another famous Winsome in Australia – Winsome McCaughey, who was Lord Mayor of Melbourne in the late 1980s. And another Australian musical connection too – Peggy Winsome Glanville-Hicks was a Melbourne-born opera composer and music critic who flourished in the middle of the 20th century.

Other successful Winsomes include British playwright Winsome Pinnock, and US Republican politician Winsome Sears. Interestingly, Sears was born in Jamaica and Pinnock’s parents were Jamaican, so there seems to be a West Indian connection. There was a grassroots playwright in Jamaica who wrote under the code name “Winsome” about 20-30 years ago. You can still find the name Winsome in use in Jamaica today, including singer Winsome Benjamin, and prize-winning cook Winsome Murphy.

Although Winsome is a secular virtue name like Felicity or Honour, the word winsome has come to have a particular meaning for evangelical Christians. The book Winsome Christianity by Henry Durbanville was published in 1952, and Winsome Evangelism by Ponder W. Gilliland came out in 1973.

I can’t pretend to be an expert on the subject, but my understanding is that the general message is to be winsome in your Christianity in order to attract more converts, and that some evangelists even use the word winsome to mean “capable of winning souls to Christ”. Author Neil Gaiman is apparently a big fan of the meaning of language changing over time, so I expect this example would be of great pleasure to him. It does give the name Winsome a special meaning for some Christians, so that it could become a religious virtue name in this context.

Winsome is a name I find very intriguing – the meaning of the word winsome seems very feminine to me, and Winsome is overwhelmingly used as a female name. Yet the name itself isn’t frilly in the least, having a similar sound to the male name Winston (which also comes from the Old English for “joy”). It’s a strong-sounding name for a girl, but with a dainty meaning.

Winsome isn’t a name I’ve ever seen on a baby or a child, and its heyday (if it can ever be said to have had one) was over many years ago. However, Winnie is becoming hip once more, and Winsome would be a rare and unusual way to reach it.

POSTSCRIPT: Abby Sandel mentioned Winsome in her Nameberry Nine column, and I was surprised and pleased at how many Berries liked or even loved the name Winsome.

POLL RESULT: Winsome received an approval rating of 61%. 21% of people thought it was an interesting modern virtue name, while 19% loved the idea of Winnie as the short form. However, 18% were reminded too strongly of the phrase win some, lose some. Only one person thought the name Winsome was too cutesy.