changing names, changing your name as an adult 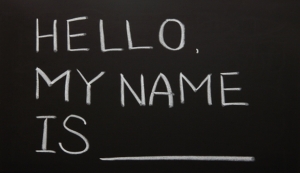 Chloe is 24 years old and from country Australia, and is seriously considering a change of name. She likes the sound of Chloe, but for some reason she can’t quite pinpoint, she has never felt entirely comfortable with her name.

She is now at the point where she really wants to pick a name and put an end to the wondering. With her parents’ blessing, she would like to legally change her name on her 25th birthday.

The name that Chloe is thinking of changing to is Claude. She likes the fact that it is unisex, short, and begins with the same KL sound as Chloe, so that she would get used to it quickly.

Chloe is studying in Europe, where the name Claude is easily accepted as a female name. However, she is planning on returning to Australia, and she worries that Claude may seem as if she chose it to be “exotic”.

In French, Claude is pronounced like KLODE, and in Australia most people would instinctively say it KLAWD, but that doesn’t bother Chloe. She doesn’t want to force a specific pronunciation on others, and is happy for people to say Claude in whatever way is natural to them. She realises that in Australia Claude would be seen as a man’s name, and an old man’s name at that, but she feels that its fusty old guy image will actually be fine on her.

Chloe thinks that if Claude seems too male, she could be Claudette or Claudie on paper, but be called Claude in everyday life. She has also thought of Clementine, named Clem, but her last name is Martin, and she doesn’t like the way that the m of Clem would run into the initial letter of her surname.

Chloe’s family is supportive of her, and she won’t pick a name they don’t like, or don’t think suits her. They are a family which often uses nicknames, and would probably be comfortable calling her by a different name.

When her parents were choosing baby names for her, her dad’s choice was Cate and her mother’s was Clare, so she would really like to stick with a name beginning with C. Chloe wouldn’t force a change on her family, and if they wanted to keep calling her Chloe, that would be fine.

Chloe, this is the first time someone has written into the blog about changing their name as an adult. I don’t have that much experience, but I’ll definitely do my best.

It occurs to me that although Chloe and Claude both begin with the same sound, and are similar in length, they are very different in style, and this might be a bigger change than it looks on paper.

I was curious to know whether people would readily accept an Australian woman named Claude, so I took a straw poll amongst my acquaintances. There seemed to be two responses: (1) Claude is obviously a man’s name; only an idiot would think a woman could be called Claude and (2) Claude is clearly a unisex name; you would have to be ignorant not to realise that Claude is a female name too. It seems like a name choice that could be polarising, attracting strong opinions.

For myself, I feel that I would immediately accept a French woman named Claude, but would be confused by an Australian one of that name. I can imagine you having conversations that go like this:

“Hello, my name is Claude”.

“Nice to meet you Claude. Why do you have a man’s name?”

“Actually Claude is a unisex name, and isn’t uncommon for women in France”.

It just seems like something that is always going to require explanation, and although that might not seem like a big deal now, remember that you would be Claude for more than fifty years to come, maybe even another seventy.

I do think it might be easier to cope with if you had an “official” girly name, but used Claude as a nickname. Then the conversations would be more like:

“It’s short for Claudette. But I prefer being called Claude”.

I guess the only thing you would have to worry about is those people who respond with, “Oh Claudette is much prettier. I think I’ll just stick with Claudette, since that is your real name”. However, these would be an annoying minority, and you seem like a very easy-going person who doesn’t get all huffy about their name anyway.

I think I like Claudie better than Claudette as a long form of Claude; to me Claudette seems a bit dated, although really it’s so rare that it could be any age. The thing with Claudie is that if you pronounced it klo-DEE or KLO-dee, it really wouldn’t be very different to Chloe in sound, which might make for an easier transition. I suppose you have already considered Claudia and Claudine, and rejected them, as you don’t mention them.

Clementine nn Clem
I agree with you – I don’t like the way Clem blends into your surname, and there’s something about the sound of Clem that doesn’t appeal; it’s like a cross between clammy and phlegm.

Clare
The name your mother picked out is short and simple, and as Clare is a surname, technically it’s unisex, although it’s not been used for men much in Australia, and probably hasn’t been seen as unisex since the 19th century. However, picking your mum’s choice over your dad’s might seem too much like taking sides.

Clarence
If you like the fusty old man image of Claude, then Clarence is another possibility. This used to be seen as unisex, and in fact started out as a female name. It could be shortened to Clary or Clare, although this does seem to take us back to Clare again.

Clover
This another unisex name. As a female name, it is after the plant, while as a man’s it is from the surname, derived from the word cleave. You could use Clove or Clo as the nickname, which isn’t too different from Chloe. There’s also Clova, a feminine form of Clovis, the original of Louis. Come to think of it, people might accept Clovis as female now too.

Clove
A rare nature name which could be used by either sex. Clove from The Hunger Games gives it more recognisability, but may also make it seem too trendy to you.

Cloud
Another rare unisex nature name which sounds a bit like Claude.

Clo
I have seen the name Clo in old novels; it just seems to be a variant of Chloe. It may seem too much like your current name, and it’s not unisex.

Clodagh
The name of an Irish river which is quite popular as a girl’s name in Ireland, and is said KLO-da. This reminds me quite a bit of Claude.

Cleo
This is a unisex name which can be short for anything beginning with Cleo-, such as Cleopatra (female), or Cleophas (male). As it just flips the syllables of Chloe, it seems easy for everyone to adjust to. I have to admit this would probably be my favourite.

However, all my instincts are telling me that you should talk this over thoroughly with your parents. It seems as if Chloe was their second choice for you, a nice sensible compromise between Cate and Clare. I can’t help wondering if this is why Chloe has never quite felt like your proper name, even though you like the sound of it.

I would tell them exactly how you feel, and give them another chance to name you, with all the knowledge they have of your adult appearance and personality, and with you providing feedback and input. (How many parents of babies would love to be able to do this?) I feel that together the three of you will be able to come up with the perfect name.

And if they love the name Claude, and say, “Wow, I wish we’d thought of that when you were born”, and you change it, no matter what questions or comments other people may make, you will always be able to say, “My name is Claude, and it’s the name my parents chose for me. They love it, and so do I”. That’s an explanation you might be happy to make for the next half century.

You seem like a sensible person with a great attitude, and a loving family, so I know you will be able to make the right decision.

NAME UPDATE: Unfortunately Chloe never got back to me, so I don’t know whether she ever changed her name, or if she settled on the name Claude.

The most common suggestion, made by 15% of people, was that Chloe should keep her name, and use Claude as a nickname. 14% favoured changing it to Claudette, with Claude as the nickname, while 13% liked the idea of switching the syllables of Chloe around into Cleo. Nobody thought Clarence was a good idea.

2 thoughts on “Should Chloe Become Claude?”