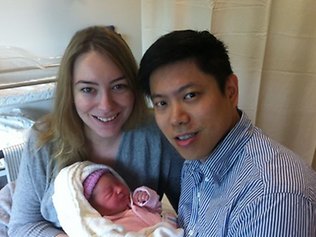 Author Jessica Rudd, and her husband Albert Tse, welcomed their first child yesterday, May 31. They have named their daughter Josephine Therese. Josephine Tse was born at Mater Mother’s Hospital in Brisbane, and weighed just under 3 kg. Her middle name is after her maternal grandmother.

Jessica is the daughter of former prime minister Kevin Rudd, and his wife, wealthy businesswoman Therese Rein. After trying out law, PR and politics, Jessica became an author when her first novel, Campaign Ruby, was published in 2010. It’s a comic chick-lit novel about Australian politics, and the sequel, Ruby Blues, came out last year. Campaign Ruby attracted much attention because the plot appeared to be heavily influenced by the career of Jessica’s father.

Albert moved to Australia from Hong Kong as a child. A solicitor and banker, he works for the Macquarie Group in China.

Jessica and Albert were married at Albert’s old school, Anglican Church Grammar, in 2007, after a lengthy courtship. They are currently based in Beijing.