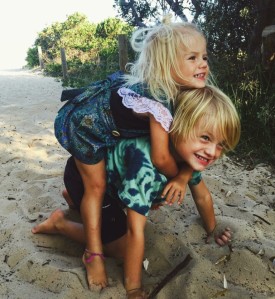 These are name stories from The Best Gift of Life website, as mothers interviewed are asked how they chose their childrens’ names. There are so many places to find a great name, from books you disliked, movies you didn’t watch, and baby name phone apps you hated!

Many of these names have been featured in the Birth Announcements section of the blog, so may seem familiar.

Australian/Canadian couple Meagan and Brad have four children: North, aged 7, Indigo, aged 5, Juniper, aged 3, and Sage, aged 1. North was named in honour of Canada, while Indigo’s name was inspired by the Third Eye chakra. Although Juniper and Sage’s names aren’t explained the family love the outdoors, so nature names seem in line with their interests.

Jessie and Adrian from Tasmania have two children named Liffey, aged 2, and Jarvis, aged 7 months. Liffey’s name was chosen before she was even born, as Adrian and Jessie had visited local landmark Liffey Falls and loved their serenity; they agreed Liffey would be a sweet name for a girl if they ever had a daughter. Jarvis was named after Jessie’s dad’s home town – Jervis Bay is in the coastal region of the Australian Capital Territory, and pronounced JAR-vis.

Leah and Colin had a little girl named Eva James at the start of the year. Eva is named after Leah’s grandmother that she had a special bond with, while the middle name James is after her father.

Lucy and Hayden live in New Zealand, but their son Mickey Memphis, aged 2, was born when they lived in Australia. Mickey was the name they were always going to use, regardless of their child’s gender, and Memphis is due to Colin’s love of blues music. During labour Lucy was listening to the radio, and the song Hey Mickey came on, which seemed like a thumbs up to their choice.

Jaimi and Jarrud have two sons named Ziggy, aged 4, and Jango Sting, aged 1. Ziggy’s name came from watching the TV series The Wire, which has a character named Chester “Ziggy” Zobotka. The suggestion started as a joke, but soon they agreed it was the perfect name. Jango’s name was inspired by bounty hunter Jango Fett from the Star Wars franchise, while his middle name Sting was after the rock star (Sting was considered too harsh-sounding to be a first name).

Chenoa and her husband have two children named Baylee and Isla [pictured]. Because their surname begins with M, they wanted their first child’s initials to spell BAM, as their “womb name” was Bamba. In a tragic twist, Chenoa learned her father only had a few weeks to live just weeks before the baby was due. Chenoa’s dad Allan had a vivid dream of a boy in the family named Baylee, so that was the name they chose; Allan is Baylee’s middle name, spelling BAM. (Baylee was induced early so that he could meet his grandfather). Isla was named with the idea of isle, island, and as they often call Baylee Bay, they have two water-inspired names for their children.

Kate and Lachie are from Sydney, but live in the Cayman Islands. They have two daughters named Olivia, aged 5, and Eadie, aged 3. They loved the elegance of the name Olivia, while Eadie was named after seeing Sienna Miller portray the actress/model Edie Sedgwick in the film Factory Girl.

Amber and Johnny have two sons named Franklin Ray, aged 3, and Hugo John Austin, aged 1. When pregnant with their first child, Amber was at the movies with Johnny and a trailer for the movie The Watch came on, with Jonah Hill portraying a character named Franklin. That reminded them they loved the name Franklin, and Ray is after Johnny’s father. The second time around names were harder. Johnny suggested Hugo after he had been using a baby name app, and John was in the middle in honour of Johnny himself. The second middle name Austin was Amber’s brother Jesse’s middle name – Jesse died not long before Hugo was born.

Adele and Matthew have three children named Ryland, aged 6, Reid Alex, aged 4, and Pearl Lavender, aged 1. Matt chose Ryland’s name as Adele was too much in shock over not having a girl to think of anything. Reid was the only boy name they agreed on for their second child, and the middle name Alex was after Ryland’s imaginary friend. Pearl was the girl’s name Adele always wanted, but it took until the third child to convince Matt. The middle name Lavender was a suggestion by Ryland, who was keen to have a sister since he already had a brother. His suggestion for a boy was Shame, as he thought it would be a shame to have a third boy!

Holly and her best friend Chase became parents to Otto Henry Rowu last year. Holly had a baby name app on her phone which she was going to delete as it kept suggesting names she hated such as Laddie Boy and Paulina. Then it suddenly came up with Otto, which she unexpectedly loved. Henry is after a family friend who passed away. The second middle name Rowu is an Aboriginal word, pronounced like roar-war. It’s the name of a native flower which grows in the sand, and was chosen by a family friend who is Yolngu. Holly is raising her toddler nephew Theodore, and by chance Theodore and Otto sound like a perfectly matched sibset.

Danielle and Chris have two sons named Emmett and Myles. Danielle read Twilight, and although she wasn’t a fan of the book, did love the name of the character Emmett. Meanwhile Chris loved Dr Emmett Brown from Back to the Future, so readily agreed. The second time around was harder, as their chosen name Peyton didn’t match well with their surname. They saw Myles in the credits of a movie, and both loved it immediately, so the decision was made.