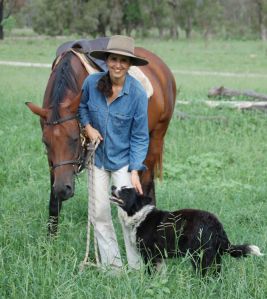 Therese’s first romance novel, Redstone Station, was published last year and became a best seller. Her latest book, Charlotte’s Creek, will be released next month. When not writing, Therese helps run the family cattle station in Queensland. Cedric is a farmer; he met Therese when she was riding the Bicentennial National Trail from Victoria to Queensland in 2003/2004. They live in Bajool, about an hour from Gladstone.

Therese’s heroines are named Alice and Lucy, but her daughter has a much less common name. Parents in country areas seem more likely to choose retro and vintage names, and I think this one is charming.