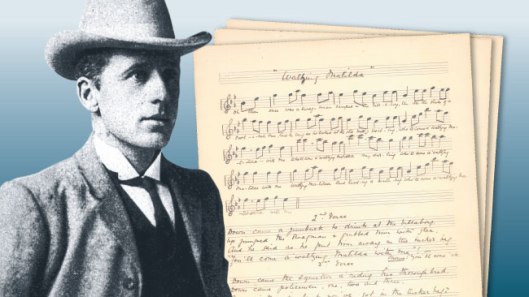 On Sunday February 17 this year it will be the 149th birthday of Andrew Barton Paterson, affectionately known as “Banjo” Paterson. To celebrate, The Orange and District Historical Society will be throwing him a birthday party, with a car rally, picnic lunch in Banjo Paterson Park, poetry readings, stories of Banjo’s life, and walk around the historic property where he was born.

Because this is a name blog, I feel obliged to explain that Paterson was named Andrew after his Scottish-born father, and his middle name Barton was a family name from his mother’s side; he was related to Edmund Barton, who would later become Australia’s first prime minister. Because he and his dad had the same name, Paterson went by his middle name, and was always known as Barty to his friends and family.

Paterson lived with his grandmother while he was attending the prestigious Sydney Grammar School, and she encouraged in him a love of poetry. He was 21 when he first began submitting poems to The Bulletin, under the pseudonym of “The Banjo” (sometimes shortened to a simple “B”). Full of fierce nationalism and a desire for a fairer society, he had some aspirations to write fiery polemic, and had even written a political pamphlet. However, The Bulletin had other ideas.

In the late 19th century, there was a movement towards the British colonies of Australia becoming one country, a feeling that Australia should be a united nation, and Australians a united people. In the effort to provide Australia with a unifying mythology that would instil nationalistic pride, it seemed that the Australian bush and outback would be the symbol to draw everyone together.

The Bulletin suggested that Banjo Paterson try his hand at bush poetry in line with its nationalist editorial policy. Banjo had been born in the Central West, but spent most of his childhood and youth growing up on the family property near Yass, north of Canberra. It was here he learned to ride, and watched the horsemen from the Murrumbidgee River and Snowy Mountains country play polo and take part in picnic races. He gained a great love of horses, and an admiration for horsemanship.

When he wrote The Man from Snowy River, it was a poem of reckless horse-riding heroism which immediately captured the nation’s imagination, and which still has our heart. It made his name, and his first poetry collection, under the title The Man from Snowy River, is the most-sold collection of Australian bush poetry ever, and is still reprinted today. During his lifetime, Banjo Paterson was second only to Rudyard Kipling in popularity among living poets writing in English.

Banjo Paterson was a colleague and friend of Henry Lawson, but had a very different way of seeing the bush. In Banjo Paterson poems, the bush is a place of adventure, romance and beauty, populated by heroes who live in freedom amongst the gum trees, honest freckle-faced youths, and characters with funny names and odd yarns about them.

Australia is the Outback, and pioneers, and songs around the campfire under the starry sky, and swagmen camped by billabongs. It’s a country of warmth and humour, and although it never quite existed, like all good mythology it lives in our hearts and minds. Banjo Paterson gave us a dream of Australia – one from which we have never truly awakened.

When it comes to names from history, often times there is a tinge of tragedy to them; some sadness attached to the real person who bore them, or even a whiff of scandal. There is no darkness to the name Banjo – Paterson was a decent, highly intelligent man who cared very much about the less fortunate, but he was essentially a happy person who was popular and sociable, and liked sport and the outdoors.

He wore his fame easily, remained modest about his talents, and never had any scandal attached to him. He was able to fulfil many of his dreams, and those that were denied him didn’t set him back. He enjoyed the ordinary love of friends and family, as well as the extraordinary love and devotion given to him by his nation. He is the model of what we hope for and expect from our celebrities.

The equine-loving Paterson took his pen name name of The Banjo from that of a horse owned by his family. This always seems to be described as “a favourite horse”, or even “his favourite horse”, but I cannot find any original source for this. Paterson himself simply describes it, no doubt with affection, as a “so-called racehorse“.

The origin of the horse’s name is apparently lost to history, but the word banjo has a history as a slang word in Australia. Slang dictionaries suggest as possible meanings “frying pan”, and “shoulder of mutton”. Another meaning was “shovel used for mining”, which during World War I, became used for any military entrenching tool – in other words, there are some correlations between the slang terms banjo and digger!

A banjo is military slang for a bacon and egg roll, because the motion of constantly dealing with crumbs while eating is reminiscent of someone playing the banjo. And Banjo Paterson himself has added another slang term – a banjo is a $10 note, because Paterson’s picture is on it, along with the words to The Man from Snowy River (Henry Lawson was on the old $10 note).

The banjo is the descendant of musical instruments brought to Colonial America by African slaves, and long seen as a staple of country music, the music of the poor and downtrodden (the kind of people that Banjo Paterson cared about). It is not known where the word banjo comes from, but the most likely source is West Africa, where it may be the same word they used for bamboo.

There are quite a few men named Banjo in Australian records, with the name most common as a nickname or alias. Many must have been named in honour of the poet, with some families named Paterson apparently finding it hard to resist having their own “Banjo Paterson”. The name isn’t unusual in Aboriginal communities, where it is given as a nickname.

The name Banjo gained fresh impetus when actress Rachel Griffiths named her son Banjo Patrick in 2003; since then the name has received more use, with 12 baby boys named Banjo last year in Victoria alone.

Banjo is an uniquely Australian name; one which seems strange in other countries, yet cosy and familiar in our own. It’s patriotic and honours one of our most beloved national poets. It’s cute, cool, and has a very Aussie nickname too – Joey.

Thank you to Brooke for suggesting Banjo as a featured name.

POLL RESULT: Banjo received an approval rating of 86%, making it one of the most highly esteemed names of the year. It was seen as uniquely Australian and patriotic (36%), cool and different (30%), and cute and spunky (20%). The remaining 14% of people thought it was over the top, weird, or ridiculous.

(Picture shows Banjo Paterson with the score to Waltzing Matilda)