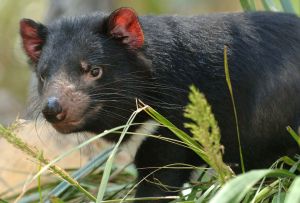 This follows on the previous list, Unique Girls Names from Tasmania, 2010. Please read the notes attached to that to see how names were chosen. Although there were fewer unique names for boys, they were much more likely to be genuine names, and not just variant spellings of common names. Whether you like these names or not, it’s nice to know that not everyone calls their children by names from the Top 100. There’s a lot of variety out there once you start looking. (If you are unsure what the animal in the photo is, it is a Tasmanian devil).

This is the English form of a Latin name derived from the Greek, meaning “immortal”. It is connected linguistically to ambrosia, the food or drink of the gods in mythology, and is said to not only taste delicious, but to have a delightful aroma. In fact, it has been argued that ambrosia means “fragrant”, rather than “immortal”. If ambrosia had any basis in reality, it may be describing a honey product, although another theory is that it refers to the hallucinogenic mushroom, Amanita muscaria. The most famous namesake is probably Saint Ambrose of Milan, a 4th century Doctor of the Church who converted Saint Augustine. Interestingly, according to legend, bees swarmed on Ambrose’s face as a baby, leaving behind a drop of honey; this does seem to link the saint with the mythical ambrosia. An old-fashioned name, this fits in with the antique name revival, and the S/Z-ending for boys names. The meaning, and its associations with divine sweetness, is also hard to resist.

This is the name of a Jedi knight in the Star Wars movies, father of Luke and Leia Skywalker, who crossed over to the Dark Side, and went on to become the heavy-breathing evil villain known as Darth Vader. Annikkin Starkiller was the name that George Lucas has originally chosen for Luke Skywalker, and when there was a major plot change and Darth Vader became Luke’s dad, a slight change of spelling meant that Darthy could have Luke’s old name. It’s sometimes claimed that George Lucas took Anakin’s name from his friend, Brtish film director Ken Annakin, but Lucas denies this. Although it’s tempting to give this name all number of foreboding meanings, we should remember it was originally planned as the hero’s name. It wasn’t clear in the beginning what kind of person the protagonist was going to be, and in one version it was an old man, and in another, a woman, so the name predates the character and the plot. Most likely, George Lucas just made it up.

This is the name of the Scottish-born Australian rock musician, Bon Scott, who was the lyricist and lead singer for AC/DC, until his death in 1980, aged 34. AC/DC dedicated their next album, Back in Black, to him, which is the best-selling rock album of all time. Bon Scott is regarded as one of the greatest lead vocalists, has been inducted posthumously into the Rock and Roll Hall of Fame, and been honoured in both his home town of Fremantle, Western Australia, and his birthplace of Kirriemuir, Scotland. Bon was born Ronald Belford Scott, and his nickname was given to him in primary school. As there was already a classmate called Ronald, and as Scott had recently emigrated from “Bonnie Scotland”, he was dubbed Bon. The Scottish word bonnie means “beautiful, fair, fine”, and is taken from the French word bon, meaning “good”. Not only honouring a rock legend, this name seems similar to Beau in meaning and origin.

This is from an Irish surname meaning “son of Flannchadh”, with Flannchadh being a Gaelic name meaning “red warrior”. The name is well known in Australia, because of the poem Clancy of The Overflow, by Banjo Paterson; The Overflow is the name of a station where Clancy, a drover, works. It’s based on the true story of Paterson, a lawyer, sending a letter to Thomas Gerald Clancy of The Overflow, and imagining Clancy’s enviable life in the bush, under the “glory of the everlasting stars”. The reply that he received to his letter – “Clancy’s gone to Queensland droving and we don’t know where he are” – delighted Paterson, and was included in the poem. Clancy also appears briefly in The Man from Snowy River, and when that poem was made into a movie, the role of Clancy was played by Jack Thompson. Clancy of the Overflow is a romanticised image of bush life as dreamed of by the city dweller, and probably seems a patriotic choice as a name.

This is the name for the fuel used in diesel engines, which are named after their inventor, French-born Rudolf Diesel. His German surname is said to be based on a short form of either Matthias or Dietrich. As it sounds quite tough and butch, and has connotations of being able to keep going like a mechanical engine, it’s been a popular nickname or assumed name, for celebrities such as American actor Vin Diesel, Australian rock singer Diesel, American basketball player Shaquille “The Diesel” O’Neill, and AFL player Greg “Diesel” Williams. Diesel is also a popular name for dogs, and with “dog names” for boys in style, Diesel seems very usable. US Olympian softabller, Jennie Finch, called her second son Diesel Dean Daigle, so now it’s a celebrity baby name as well.

An Old English name meaning “gracious protection”, this fell out of use after the Norman Conquest, and became best known as a surname. Thackery’s History of Henry Esmond is a historical novel set in the time of Queen Anne, where the hero spends the whole book in love with his foster-sister and cousin, but marries his foster-mother instead (also his cousin). This surname is part of Australian history, because James Esmond was an Irish-Australian who was one of the first people to find gold during the Victorian goldrush. He was also politically prominent in the miner’s organisation, and commanded a section of miners in the Eureka Stockade rebellion. It’s tempting to wonder if baby Esmond is a descendant of James, or whether the name was chosen in honour of this famous rebel.

This is a small coastal town on the Clarence River in New South Wales, and its name is derived from an Aboriginal word meaning “by the sea”. It is pronounced eye-LOO-ka. Iluka is a popular tourist destination, blessed with beaches and rainforest, and people who live in the chilly southern parts of Australia may enjoy spending their winters here. Maybe the parents of Iluka spent a happy holiday in the town? It’s easy to see the appeal of it as a name, because it is so similiar to the popular Luka, but has a distinctive Australian meaning.

This is the name of a small tree or shrub native to New Zealand and south-east Australia – including, of course, Tasmania. It’s scientific name is Leptospermum scoparium, and it’s also called tea tree (not the same tea tree that tea tree oil is made from). The name manuka is Maori, and comes from history, where one of the sea-going canoes that brought the Maoris to New Zealand is said to have been called Mānuka. It’s pronounced mahn-OO-ka. Manuka honey is not only delicious, but recently it’s been discovered to have powerful antibacterial properties, and you can now buy medical-grade manuka honey to apply to wounds. There is a town in Tasmania near Hobart called Tea Tree, which may be named after this useful plant.

Meaning “sky, heaven” in Tibetan, a namkha is a yarn or thread cross used in Buddhism as a sacred weaving, used in ritual or placed on an altar. “Thread” is the literal translation of the word tantra, and the threads of the mankha symbolise the warp and weft of time and space. A famous bearer is Tibetan Buddhist teacher, Rigdzin Namkha Gyatso Rinpoche.

One of Noah’s sons in the Old Testament, Shem is Hebrew for “name”. It can refer to someone’s fame and reputation, and also to their essential nature and being. While Noah is one of the most popular boy’s names, the names of his sons, Shem, Ham and Japeth, have had only occasional use. This may be because from early on, these three men were seen as the progenitors of the various races (as that vague and inaccurate word was understood at the time). Different writers have claimed Shem as the source of either the “Semitic” peoples, all Europeans, Germans, Greeks, Persians, or Indians; some texts even say that God made Shem brown skinned, Japeth fair skinned and Ham dark skinned. These ideas on race and ethnicity now look rather embarrassing, or even offensive; at the very least, we know them to be scientifically wrong. In the Bible, Shem is said to be an ancestor of Abram, who founded the Abrahamic religions. The name is pronounced SHAYM, and although uncommon, sounds not unlike familiar names such as Sean, Sheamus and Shane.

This is an anglicised form of the Danish name Søren, which is a form of the Roman name family Severinus, derived from the personal name Severus, meaning “stern” in Latin. Certain Harry Potter fans may see this as a way of using the name of grim Potions Master, Professor Snape, without actually calling their son Severus. The name has been used several times in recent popular culture; most notably the vampire Soren in the Underworld films. In the Charlie and Lola books and TV series, Soren Lorensen is little Lola’s imaginary friend. If these namesakes seem a bit lightweight, Søren Kierkegaard was a 19th century philosopher and theologian who has been enormously influential in shaping our ideas of the self and subjectivity. It’s pronounced SOH-ren.

According to Greek mythology, the Titans were a race of gods that ruled in the legendary Golden Age. They were the Elder Gods who were overthrown by the Olympians; this myth of a “war in heaven”, where one group of gods replaces another, exists in many cultures across Europe and the Middle East. The meaning of their name is uncertain, but is often intepreteted as “to stretch”; the Greek poet Hesiod refers to them as “the Stretchers”, because they stretched out their power. Other scholars believe it comes from the Greek for “white earth, white clay, gypsum”; they believe that this white dust was used in ancient shamanistic rituals, and it is from these almost-forgotten rites that the myth of the Titans grew. The name has been given to a moon of Saturn, and inspired the name of the element, titanium. The Titans, often imagined as gigantic figures, are part of popular culture, and you may find Titans in comic books, science fiction movies, and video games, as well as sports teams – including the Gold Coast Titans. Although the name may seem too big for a little boy, it sounds similar to names such as Tate, Tyrone and Titus.